It’s that exciting time of year once again when Gartner releases its new Magic Quadrant for Analytics and Business Intelligence Platforms. It is without doubt one of the year’s highlights for all of us Analytics-nerds. This year’s study is definitely as interesting to read as those from previous years. In fact I dare say it is particularly relevant reading for anyone who works with or is interested in the sphere of Analytics. If you don’t have the time or energy to read the full study, I have tried to summarise my impressions of the report below.

Gartner’s Magic Quadrant 2020 for Analytics and Business Intelligence Platforms is released in February every year. The report evaluates the strengths and weaknesses of the 22 suppliers who have qualified for inclusion in the report. It makes for highly interesting reading both for those who already have tools in place, and for those who are thinking of acquiring new tools. In addition to monitoring the performance of the individual companies in the ranking, it is always interesting to examine how different phenomena make their entrance as concepts before being gradually developed and sometimes emerging as truly major trends according to the Gartner assessment.

One such phenomenon is Augmented Analytics, which we have previously written about in other blog posts. Gartner continues to cement this concept in its new report. Augmented Analytics is an over-riding term for the Machine Learning concept, and similar methods are used to support aspects such as data preparation, the generation of new insights, and explanations of how information should be interpreted. The aim is to simplify things for users and developers and to make them more independent, for instance in Self Service BI. (Just for fun I did a search of the concept in last year’s study compared with this year’s study. Result for 2020: 39 hits, result for 2019: 51 hits. So somewhat fewer this year, but it is nevertheless a concept that recurs both in general literature and linked to individual suppliers.)

The report also mentions that 2019 was the year when migration to the Cloud leaped ahead. Gartner believes that players with an extensive Cloud ecosystem now dominate the market. This closely matches my own observations of the market, not just regarding suppliers but also in respect of customers implementing new solutions and updating their older systems.

One area where Gartner has shifted back and forth over the years is Enterprise Reporting (classic standard reports such as SSRS, Business Objects and Cognos). They are now back again and Gartner highlights that one important property for suppliers is to show how their modern Analytics solutions can integrate standard reports in a seamless way.

One sub-category within Analytics that Gartner takes up in the report is Embedded Analytics, where for instance components from solutions are used in a different context, for example in an external Web, in an intranet, integrated into other applications such as business systems and so on. These application areas mean that Analytics reaches beyond conventional user groups internally and all the way to customers, suppliers and other sectors.

It’s always exciting to write about and discuss tool choices. For many people, the issue of tools seems to be virtually a religion and it can be very sensitive to criticise or even spotlight certain tools. Nonetheless, it is important to truly try to examine this issue in depth, beyond all the preconceived notions. The Gartner report is definitely a useful guide in this respect. 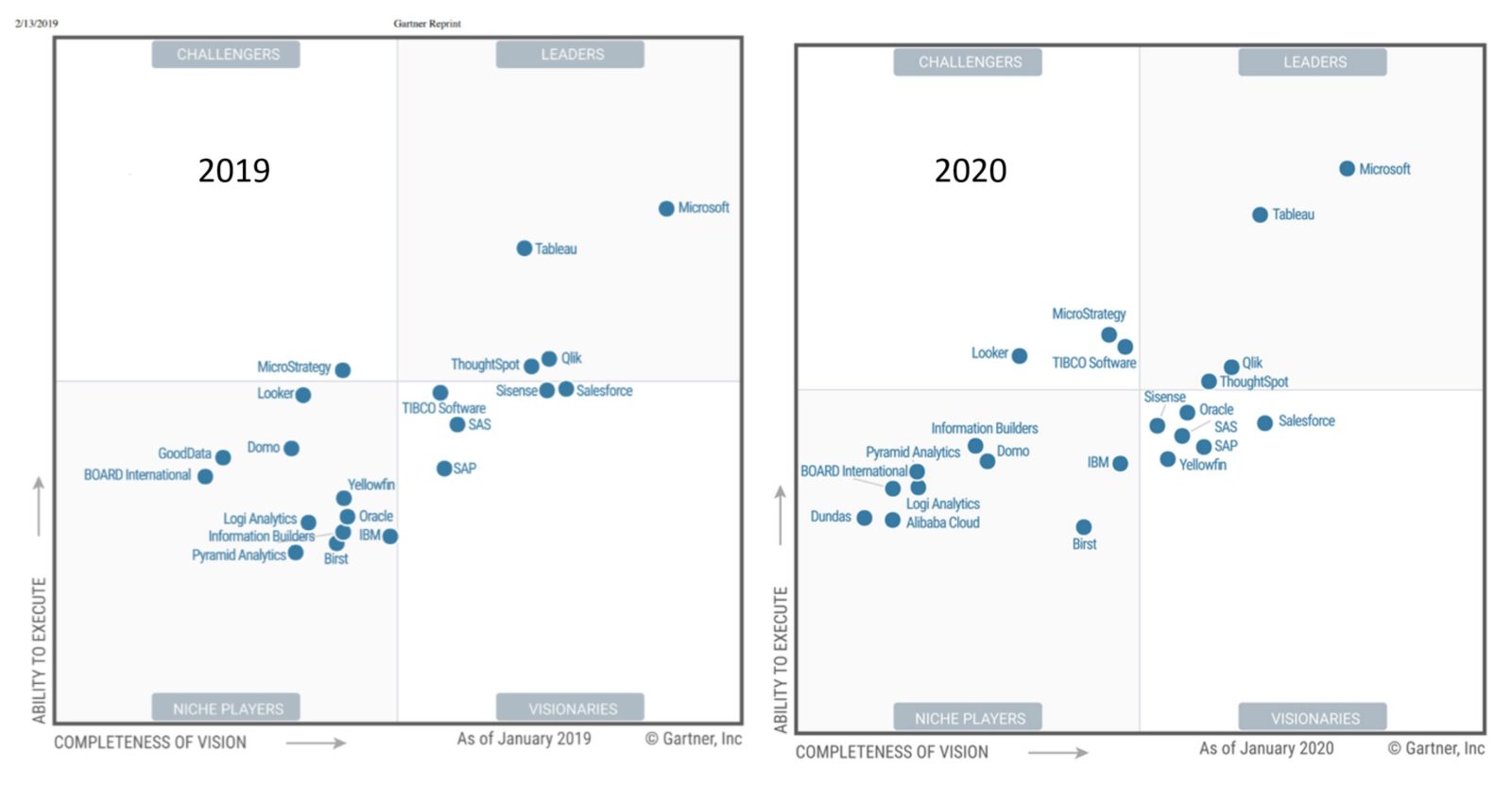 Like I said, the leaders are the same, with relatively small shifts (more detailed comments below). Looker, which has been acquired by Google, makes its appearance in the Challengers quadrant together with Tibco. The Visionaries remain unchanged apart from Tibco moving to the Challengers sector and Yellowfin migrating from Niche Players. It is noteworthy that Oracle is once again one of the Visionaries.

It is always very interesting to read through Gartner’s reports, which are well-written and thoroughly researched. This year’s report was no exception. We will no doubt return to this year’s Magic Quadrant and more in-depth analyses in the future. If you would like to discuss market developments and what they mean for your particular organisation, don’t hesitate to contact me or any of my expert colleagues.

We also try to supplement Gartner’s and other experts’ global perspectives with a Swedish perspective on market developments. We do this not least by carrying out an annual Swedish Business Intelligence & Data Science study. We are currently in the process of compiling this report and will present it at the Business Intelligence & Data Science Day 2020.

All posts by Thomas Svahn